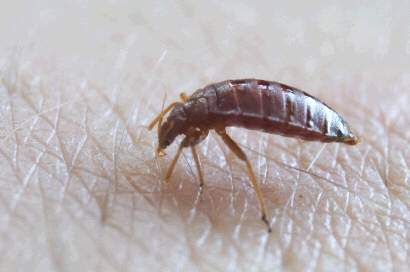 Do you have bed bugs control problem you can call Pest Chase any time.

Bed bugs, known scientifically as Cimex lectularius (Cimicidae) are small wingless insects that feed by hematophagy - exclusively on the blood of warm blooded-animals. As we are warm-blooded animals we are ideal hosts for them.

They are called bed bugs because of their preferred habitat in human homes: sofas, bed mattresses and other soft furnishings.

Bed bugs are seen as a growing problem within all types of dwellings, including private homes, dormitories, cruise ships, army barracks, and shelters.

Over millions of years bed bugs have evolved as nest parasites - inhabiting the nests of birds and the roosts of bats. Some of them have learnt to adapt to the human environment and live in our nests, i.e. our homes, and more specifically, our beds. Newborns, called hatchlings or nymphs, are tiny, about the size of a poppy seed, while adults grow to about ¼ of an inch long. Their shape is oval and flattened. Both nymphs, eggs and adults are visible to the naked eye.

When seen close up they may have a white, light tan to a deep brown or burnt orange color. Just after molting most of them are plain white. When they have had their feed a dark red or black blob may be observed within their body. They will instinctively seek shelter in dark cracks and crevices when disturbed.

How dangerous are bed bugs to humans?

Most bed bugs feed on their hosts while they are asleep. The host supplies them with blood in a painless way, never knowing it is happening. While feeding they inject a small amount of saliva into the host's skin. The more they feed on one particular host, say a human, over a period of several weeks, the more sensitized that human becomes to their saliva. Until eventually the host develops a mild to intense allergic response.

People who have become sensitive to bed bug bites - their saliva - have lesions similar to mosquito or flea bites. Most humans will think they have been bitten by some insect, such as a mosquito, and never realize who the true culprit was.

The common bed bug, (Cimex lectularius) has adapted well to human environments. It is generally found in temperate climates. Cimex hemiterus is more common in tropical regions, and has mainly poultry and bats as its host. Leptocimex boueti, found mainly in South America and West Africa feeds chiefly on humans and bats. Haematosiphon inodora, of North America, feeds primarily on poultry.

How do bed bugs feed?

A bed bug is about the size of a grain of rice. This bed bug has recently had a feed.

The most active time for a bed bug is about one hour before sunrise - the peak time for feeding. However, they will try to feed at any time of day or night if they are hungry enough, and if the opportunity is there. They prefer nighttime and hate sunlight.

They will reach their host either by crawling straight towards them, or climbing a wall and then across the ceiling until they feel a heat wave - when they jump down onto their host. The bug is attracted to the host by both its warmth and the presence of C02 (carbon dioxide). 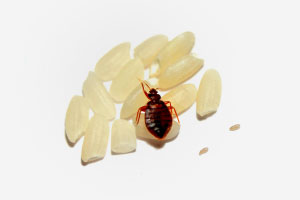 It pierces the skin of its host with two hollow tubes. One tube injects saliva which contains anesthetics, so that the host feels nothing, and anticoagulants, so that the blood flows out freely. The other tube sucks the blood in.

Feeding takes about five minutes, after which the bug returns to its hiding place. Bites are not noticeable by the host until at least a few minutes or some hours afterwards. Hosts, for example humans, will be aware of a bite after scratching it. Often bites may not be noticeable for several days.

Bed bugs will feed every five to ten days. They can, however, last for several months without feeding. If there is no food around they can become dormant for over a year. A well fed bed bug has a lifespan of about six to nine months.

How do bed bugs reproduce?

Bed bugs reproduce by traumatic insemination, also known as hypodermic insemination. The males have hypodermic genitalia which pierce the females anywhere on their abomen and ejaculate sperm into the body cavity. The sperm diffuse through the insides and reach the ovaries, resulting in fertilization.

The female bed bug lays approximately 5 eggs in one day and about 500 during her lifetime. Eggs are about 1 mm long and are visible to the naked eye. They have a milky-white tinge.

The eggs take about two weeks to hatch. The nymphs (baby bed bugs) start feeding as soon as they hatch, and pass through five molting stages before reaching maturity. During each molting stage they need to feed once. It takes about five weeks to reach maturity at a room-temperature environment.

Bed bugs can only reproduce when they have reached maturity.

How do bed bugs get into your house?

Bed bugs may get into a new home as stowaways when luggage, furniture and bedding is moved into a new home - especially in the case of second-hand furniture. Perhaps we should be careful when purchasing second hand furniture at knock-down prices - a careful visual inspection should result in detecting them, if any are present.

Even vacant and seemingly clean homes may have bed bugs in them - they can survive for many months without any food. They can also move from apartment to apartment through hollows in walls and holes and tubes that wires and pipes go through.

A bat or bird that flies into a home could introduce bed bugs, and some other bugs as well.

How do I know if I have bed bugs in my house?

The biggest sign of bed bugs is people complaining of bites that occurred while they were asleep. If this happens you should examine the bedrooms for bed bugs and signs of bed bug activity. Look carefully into the creases in the bed linen, and seams and tufts of mattresses and box springs for bugs or eggs. The eggs will look like tiny pale poppy seeds.

Signs of bed bug activity may exist beneath loose areas of wallpaper near beds, in the corner of desks and dressers, in laundry, and in drawers.

Look out for dark brown or reddish fecal spots (bed bug droppings, excrement). If an area is very infested you may sense a coriander-like odor. The excrement is a liquid that looks either light brown or black that can either bead up or be absorbed by the material around it.

Dogs can be trained to sniff out live bed bugs or past infestations. A dog's sense of smell is so acute that it can pick up the scent of a single bed bug.

What happens when I get bitten?

When you are bitten a raised red bump of flat welt (also called a papule or a wheal) will appear, often accompanied by very intense itching. The anesthetic contained in the bed bugs saliva causes an allergic reaction which results in the red bumps. They look very similar to mosquito bites, but last a lot longer. Signs and symptoms of bug bites will only affect the surface of the skin.

Bites can sometimes take up to nine days to become visible. Unlike flea bites, bed bug bites do not usually have a red dot in the center.

Bed bugs, like fleas, tend to bite in rows. There are likely to be two or three bites all in a row. This is probably because the bed bug is disturbed while feeding, and then comes back about half an inch further down for its next bite; or perhaps it had been trying to find a good vein, and needed several attempts.

About 50% of people who are bitten show no symptoms at all and do not know it happened. This makes it more difficult to prevent or identify potential infestations. Some individuals, however, may become ill and nauseous. It is possible get skin infections and scars from scratching the bites.

When people know they have an infestation of bed bugs in their house they tend to become alarmed. Research, however, indicates that bed bugs do not transmit disease, even though they do bite and take blood. Infections will occur as a result of scratching, and not from a pathogen passed on from the bug.

Very rarely, some people may have an anaphylactic reaction to bed bug bites. It is possible to have an asthmatic reaction when they shed skin as they grow and die; but cases are very rare.

Most bites resolve within one to two weeks. Treatment focuses on relieving symptoms, and include:

Pest Chase Termite and Pest Control Inc. received an average rating of 4.9998 out of 5 stars from 317 reviews.